What is Esports Data & How to Use It

Esports data refers to all data generated from virtual sports and video gaming events, tournaments, and championships that occur on a regional or international level where both amateur and professional players and gamers compete against each other. Esports data usually includes scores, statistics, and real-time event data from ongoing games.

Today, more than 500 million people across the globe are already following and watching video game tournaments. This is leading to an everincreasing number of live esports events, esports data, and also more audience data on the people interested in esports, all accessible via API’s.

What Is Esports Data?

Naturally, this industry generates a large amounts of data.

Esports data covers all areas around professional gaming. As such it can consist of market reports but also live streams about Esports tournaments and matches.

In recent years the gaming industry has seen an enormous increase of customers as well as a sharp incline in terms of viewership both online and offline.

At the same time, many data providers have formed around the world, creating sophisticated products around market analytics and live Esports data analytics. They serve the growing demand to entertain and market products to gaming enthusiasts. 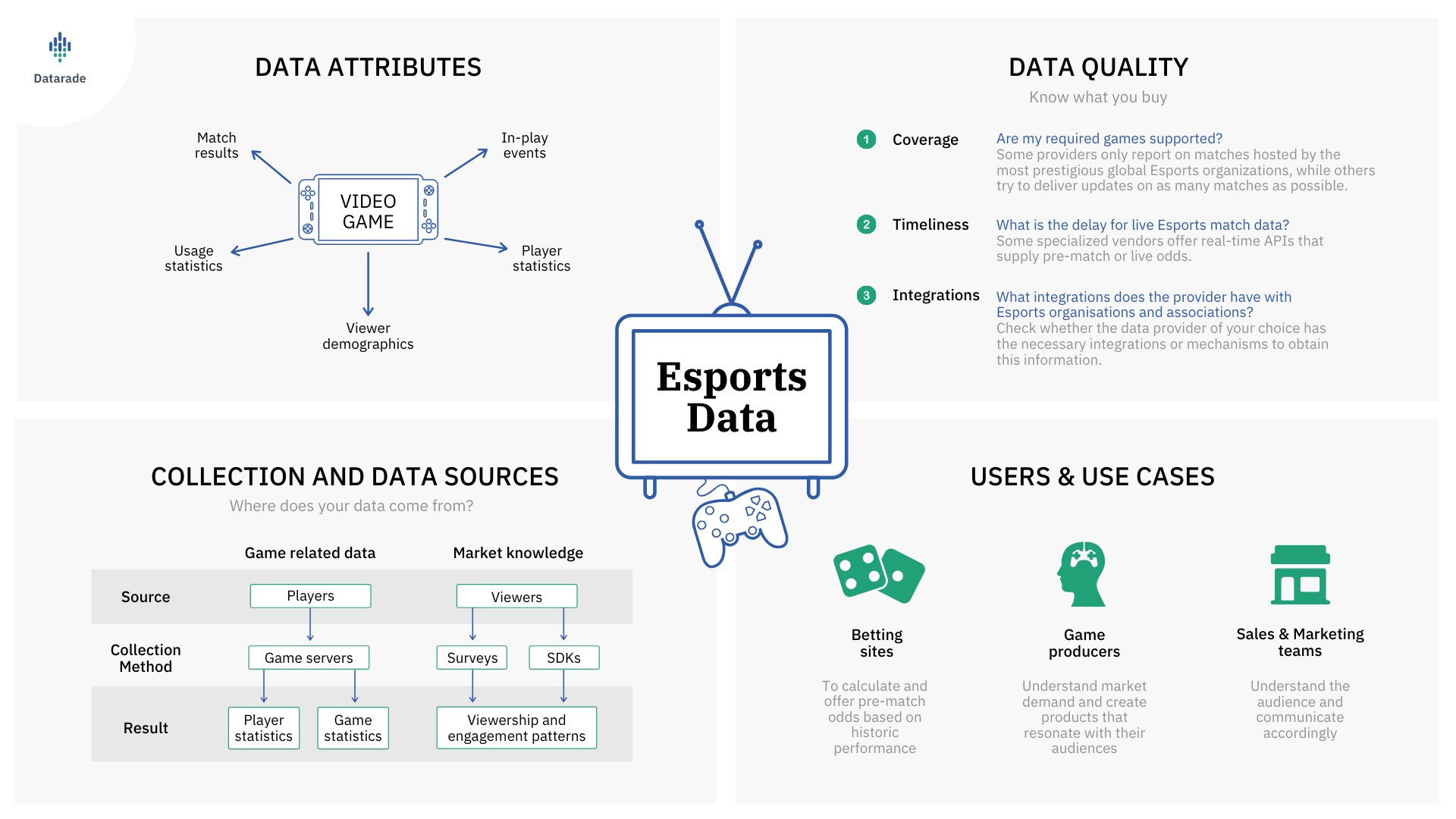 What is Esports Data Used For?

Similar to physical sports, the Esports industry has already attracted a sophisticated betting industry. Various platforms not only allow viewers to bet real money on who is going to win the next match but also provide access to more granular events like the next player to reach an important milestone within a match.

This requires live data including the current odds. Before a match starts betting data providers also have to offer pre-match odds based on historic performance.

Live streams of matches and historic results are a central resource for media outlets covering Esports or the gaming industry in general. Most Esports Match API’s offer a quick way to receive various match statistics and thus reduce the research time for gaming and Esports related media companies.

Game development and planning
Every company that is in the market to create a new video game, gaming equipment or wants to target a gaming demographic for a specific product is dependent on accurate market reports and forecasts. Using those resources the marketing, sales and product department can make informed decisions on what steps to take next.

Virtual roaster
A new trend is the rise of fantasy Esports. Fantasy Esports platforms offer players to create their own virtual roster comprising real-life gamers. These rosters then get ranked on their real-performance, based on the matches they play in real life. Such platforms require match results, preferably in real-time to enable an advanced user experience. Esports data can provide exactly this.

Game monetization
Esports data not only helps in game development but it also makes monetization easier. Generally, most Esports games follow one of these three models: freemium, pay to play, and free to play. This is where game companies use Esports data to analyze which game will prove to be most profitable for you.

Understanding players
Esports data is not only used by companies, but it is also used by professional Esports players to get an edge over other players and get a higher rank. They use this data to come up with new strategies and to overcome the strategies of their opposing players. Some examples in which this data is used include identifying patterns on how opponents will attack, performing hidden mathematics and so on.

What Are Typical Esports Data Attributes?

The actual data points provided by the various Esports APIs can vary greatly as their providers focus on different parts of the industry.

Many providers offer general information about teams and their players as well as upcoming or historical tournaments. In most cases, this information is also enriched with historical performance data on a per-player level, listing the scores and outcomes of each match a player participated in.

More advanced providers can also offer in-detail play-by-play data, including granular events that occurred during a match. On some plans, this data is offered in a live stream. In certain cases, providers are able to offer whole game replays that allow the revisit certain scenes of a match from different perspectives.

Based on the historical performance of teams and players as well as the events of a running match, some specialized vendors offer real-time APIs that supply pre-match or live odds.

In terms of market reports and forecasts, buyers can acquire information about game rankings, player engagement statistics and market forecasts based on locations, demographics, and genres.

How Esports Data Is Typically Collected?

Most historical and live match data is collected directly from the game servers that offer reporting capabilities. As most local tournament game servers are not accessible through the internet, data providers require agreements with the tournament organizers, which can also provide tournament schedules in advance.

Market analytics, reports, and forecasts require an advanced infrastructure that aggregates usage statistics of devices and apps around the world. The raw data points are usually collected through software development kits (SDKs) that are included within software products that run on a device. These allow various tracking mechanisms to measure customer engagement that is sent to a central database.

Some market research companies rely on the classical approach of performing customer interviews with a targeted demographic for establishing reports and forecasts.

How to Assess the Quality of Esports Data?

In terms of data quality, the most important factor that buyers have to take into account is completeness/coverage. The available Esports data APIs cover a varying range of games and individual matches. Some only report on the matches by the most prestigious global Esports organizations while others try to deliver updates on as many matches as possible.

Additionally, Esports data providers that offer historical data should be evaluated in terms of data retention. Some offer data points that reach years back compared to some vendors that only allow access to data for the past year.

As Esports data is mostly based on hard facts like match reports, buyers have to evaluate closely whether the data provider of their choice has the necessary integrations or mechanisms to obtain this information.

How Much Does Esports Data Cost?

Some Esports API providers offer a public pricing table where potential buyers can immediately see a transparent list of feature sets including the costs. Unfortunately, many providers only provide pricing information based on individual requests that can be sent to the respective sales department.

The challenges with Esports Data?

The main challenge of buying Esports data is finding a provider that fits in terms of requirements and pricing model. The various offers differ significantly both in regard to the offered data points and game coverage as well as the connected pricing model.

The already substantial and growing range of providers makes it hard to determine the unique capabilities of each as they are usually not immediately apparent from the respective websites.

Data sources
For many providers, the actual raw sources of the data are either hard to find or opaque. Buyers are only able to narrow down the number of relevant providers to a relevant shortlist by being aware of their required feature set.

Data generation
Another challenge exists in the form of how data is generated. Esports digital video, for instance, is primarily captured from mobile devices and PCs, while the broadcast digital video is captured live from a camera. Storing data in these two formats generated by hundreds of players is a tough task. Not to forget, most games also generate data in the form of game announcements, recording streams and events.

Scale
The next big challenge is related to scale. Most leasing Esports companies manage huge amounts of data in the units of petabytes which are expected to reach multiple exabytes soon. Storing such a huge amount of data and retrieving it when needed is tough.

What to Ask Esports Data Providers?

Based on your exact use case, you can ask a range of questions to your Esports data provider to ensure that they are the right fit:

As Esports market size is constantly growing, it provides a good opportunity for you to make the most out of its data to excel in your related fields.

Explore vendors in this category

The **Kochava Collective** is the largest independent marketplace for connected devices with more than **6 billion addressable device pro...

Esports Charts is a unique analytical service that investigates trends of esports development and streaming in general. Our service makes...

The **Kochava Collective** is the largest independent marketplace for connected devices with more...